In my fashion class, my professor played the documentary “Sweatshop Deadly Fashion,” a film I now highly recommend. The film follows three fashion bloggers as they journey to Cambodia to discover the working conditions of sweatshop laborers.

The documentary was very well made and is one of those things I wish I could force the whole world to watch because we should all be more aware of where our clothes come from. If you wear clothes, you should be paying attention to the fact that your purchases at H&M or stores like it cost someone on the other side of the world everything.

I won’t try to explain the movie, you should see it for yourself and see its impact firsthand. Click here to watch.

But the funny thing about watching this film in class was the context in which I watched it.

When the first few scenes rolled across the classroom projector, I thought the movie was set in the Philippines. The third world scenes playing out in front of me were so familiar. It looked like home.

The weird thing? I was sitting in a room of SMU students. Now, I am fully willing to admit that not everyone at Southern Methodist University fits the stereotypes we’re usually placed in, but the majority do. It costs over $60,000 to go to SMU every year. I go to school with a pretty high tax bracket. Most of my classmates come in to class with Gucci bags, Chanel wallets, leggings that cost more than I spend on food for a month. It’s a different world over here.

When I lived in the third world, I wasn’t very poor. My family was considered middle class. And that’s what we are here in the America. Middle class. Not poor, but never quite reaching the lifestyle of some. Which I like, but it’s just a little weird sometimes.

I’ve written before about my struggle with living amongst the privileged and coming from a place where I saw poverty everywhere I went. It’s an odd weight that comes with chasing the American dream.

The sweatshop documentary shined a light on the way factory workers lived, what they earned, how hard they worked. The term “unfair” doesn’t even begin to cover it. And the fact that everything happened through the eyes of fashion bloggers was even more interesting.

Because (and I say this as a blogger myself, though not a fashion blogger and not by any means an earning blogger) let’s face it, fashion bloggers are often seen as rather shallow or spoiled, even. They live picture perfect Instagram lives and make their living off either shopping or receiving very nice free things. At least, that’s what’s usually thought. Am I wrong?

But I realized- looking from the Gucci girls sitting next to me in class, to the fashion bloggers on the screen, to the poor factory workers they were speaking to- I was at a strange crossroads.

So many of my people are the ones working for less than $3 a day under horrible conditions, but instead of being there with them, I’m on the other side. I found myself sitting with these girls who grew up in mansions and online shop to their heart’s content. Obviously I’m an odd one out because I’m a scholarship student who has to work at least a couple jobs to get by, but sometimes I forget that I’m rich. I’m so, so rich. Sure, I’ve never shopped at Gucci. I can’t even afford the Gap most times. But I live on the other side and I have a duty to take responsibility for that.

I don’t know why I get to be the one buying clothes instead of making them, but I need to learn to make my purchases in a way that I don’t have to be ashamed of.

Probably my favorite way of practicing ethical shopping is buying all my clothes at a thrift store. Not only is it super duper cheap, but by recycling clothes in that way, I am proud not to waste the hard work of sweatshop laborers.

This is only the beginning of my journey to work on being more and more ethical, but it’s a start, isn’t it? 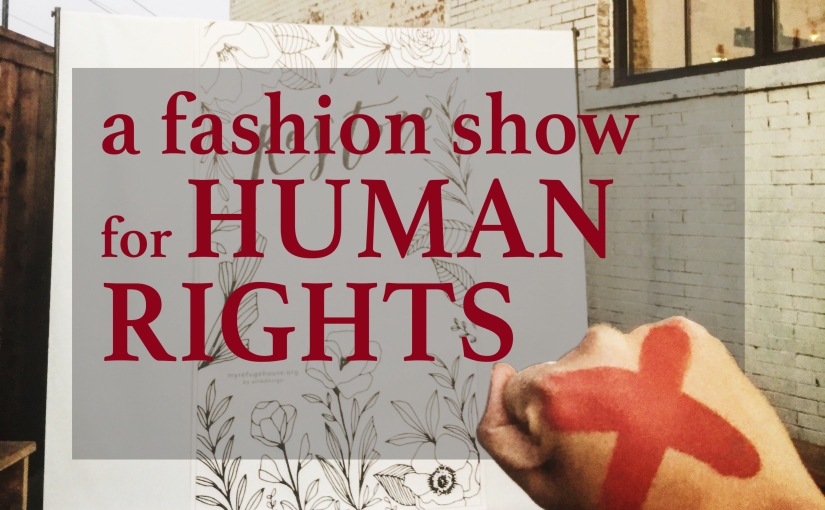 Okay, this is waaaaay overdue! But here it is! My experience going behind-the-scenes at a runway show in Dallas.

Watch and see what it’s like prepping and running a fashion show!

Fashioned for Freedom is an annual event that benefits My Refuge House in the Philippines.