You see that beautiful piece of zebrawood I’m holding? That gorgeously crafted piece of art? That is my electric-acoustic Ibanez, commonly known as Troy.

(Side note: My first guitar was a classical named Gabriella, so maybe you can connect the theme here. I unfortunately can’t plug her in or put a strap on her, so I needed an acoustic guitar to be able to bring around and use for church and performances and stuff.)

Get ready for a musical story of love and heartbreak. If you’re a musician of any sort, this might be hard to read. Just bear with me. Stay strong.

Right after the picture above was taken (the picture of me and my best friend, not the gif of Will Ferrel…), I forgot Troy at our church building. It was right after I had done a rendition of “Beautiful” by MercyMe, and I had headed to work right after. Luckily, I was meeting a friend later that day, so I just asked her to grab it for me. The thing is, Troy didn’t have a case at this time. I had still been saving up to buy one. And unfortunately, the strap was a little finicky. While my friend carried it, the strap came undone, and CRASH.

Well, his head was hanging off. (Technically it’s called a headstock, but… details.)

Needless to say, my friend was mortified. And it’s been a while since I’d seen her freak out that much. She knew how much I love Troy.

We took turns comforting each other during this emotionally traumatic time. Luckily, she being the good friend she is, paid for Troy’s repair. Guitar Center fixed him for $150. Looking back, I should’ve just used the money to buy a replacement guitar, but hindsight is 20/20, isn’t it?

Months later, on a road trip to visit our friends in College Station as pictured below, I decided it was a good idea to leave Troy in my friend’s car overnight.

On the way home, I found Troy dead again. His head was once more hanging lose. The glue from his repair had come undone, and we were back to having a broken guitar.

After going to a big worship music ministry conference with my church, I was super inspired to start playing Troy again.

This time, completely decapitated. His head(stock) wasn’t even hanging, it was just completely off.

My guitar was in two pieces.

Keep in mind, I got Troy for Christmas, but had to still pay my parents half of his cost. He was $399. I’ve spent $250 on repairs by now. And he just freaking KEEPS BREAKING.

After a very intense cry session in which I had a questioning-my-life-and-contemplating-quitting-music-forever-and-never-picking-up-an-instrument-ever-again-maybe-this-whole-thing-is-an-omen-and-I-should-just-live-a-music-less-and-miserable-existence breakdown…….

I eventually gathered myself together. An omen to stop music? Ridiculous.

I took the poor guitar to Guitar Center, and a nice man who worked there heard my sob story and offered to repair it for free, since their last repair was only a little over a month ago. There he now sits, getting his third surgery. But the Guitar Center repairman told me that he won’t last long. He explained that it’s like having a wrecked car. You can fix it, but it will never be the same. It’ll just keep breaking.

Basically, I need a new guitar. I’ll still have Troy, but I need something I can actually bring around since he’ll only last maybe a couple more months.

I’m still trying to figure out what to do, honestly. My plan was to save money for an electric guitar and a keyboard. Now I have to backtrack and figure out how to get a replacement acoustic. No new toys until I replace it. Do I get the same guitar as a replacement? Do I get a different one? Should I just get a keyboard instead? Should I wait until Black Friday? Or Christmas?

I don’t know. I’m bad at decisions. I’m still looking around and spending a questionable amount of time at Guitar Center feeling out the instruments and trying to figure out what I need to buy and with what money. We’ll see what happens.

So there you have it. The story of how Troy died. Three times. And though he’s getting repaired again, his life is over. So let’s just end this weird cliff hanger of an ending with some pictures commemorating our good times together. 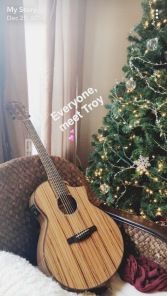 Here’s us leading worship at a teen summer camp.

Here’s one of the only humans in the world I trust to play him. 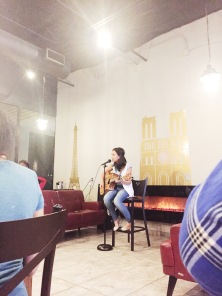